I don't think it's possible to create a "blurry" object, because "blur" is a phenomenon that is tied to optics and the way we see, not the physical properties of an object.

You could argue that something like mist or smoke looks blurry, because the edges of the smoke aren't sharply defined, but neither are solid objects.

You could argue that fluffy fur looks blurry, because the fine tips of individual hairs kind of blend it into the background, but at an appropriate distance (or rather closeness) a person with good eye sight is able to distinguish single hairs from the background.

Some artists found their own way of "blurring" a sculpture by moving away from realism and into abstraction.

Here is a random example I found online (source): 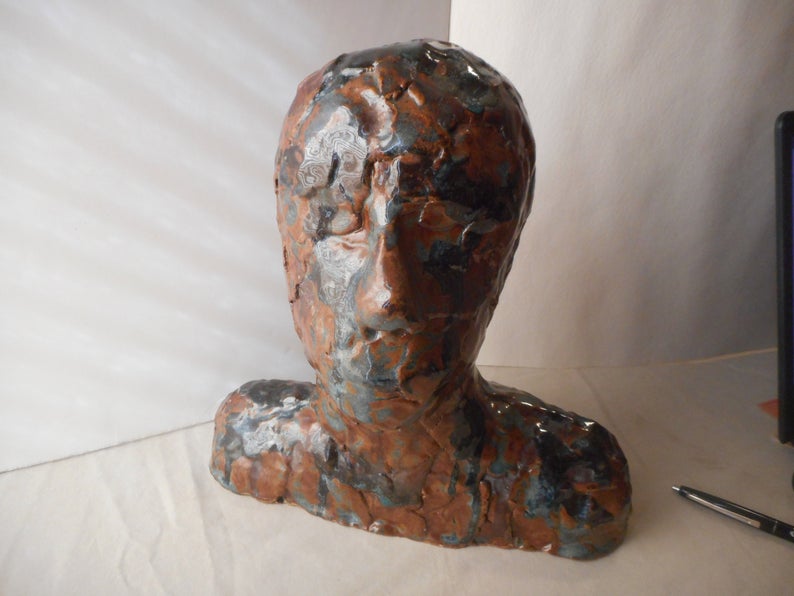 You probably see a human head with shoulders, but actually it's no more than an oval lump of clay on top of a flat rectangle. All the details are blurred, but an observer can still make out what is shown to them.

And another example (source): 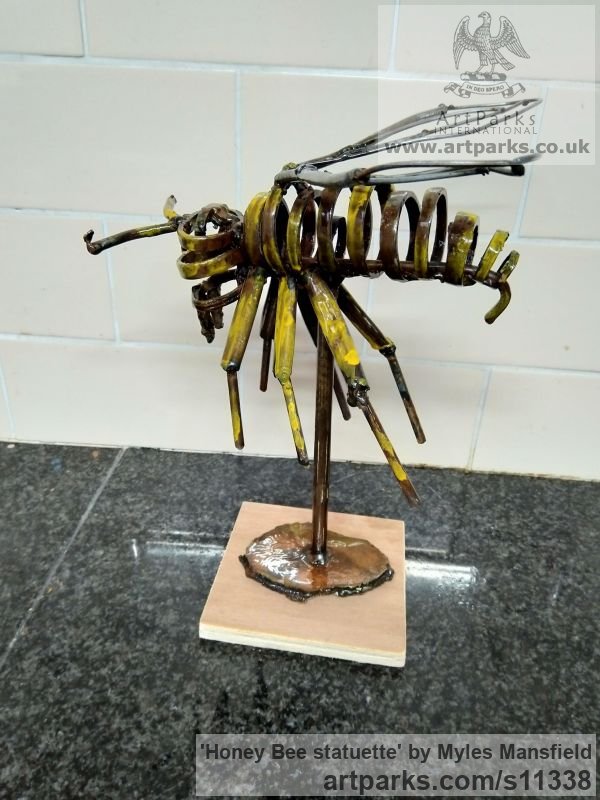 You probably see a bee, but what's actually there is no more than a bunch of metal rods and rings. It doesn't even have a real body, only some rings suspended at a short distance, but our human brains can interpret the missing parts like a blurred picture and create the illusion of an animal.

The first thing that comes to my mind are the works by the contemporary German artist Gerhard Richter. He has a huge body of paintings that are famous for being blurred, like this one: 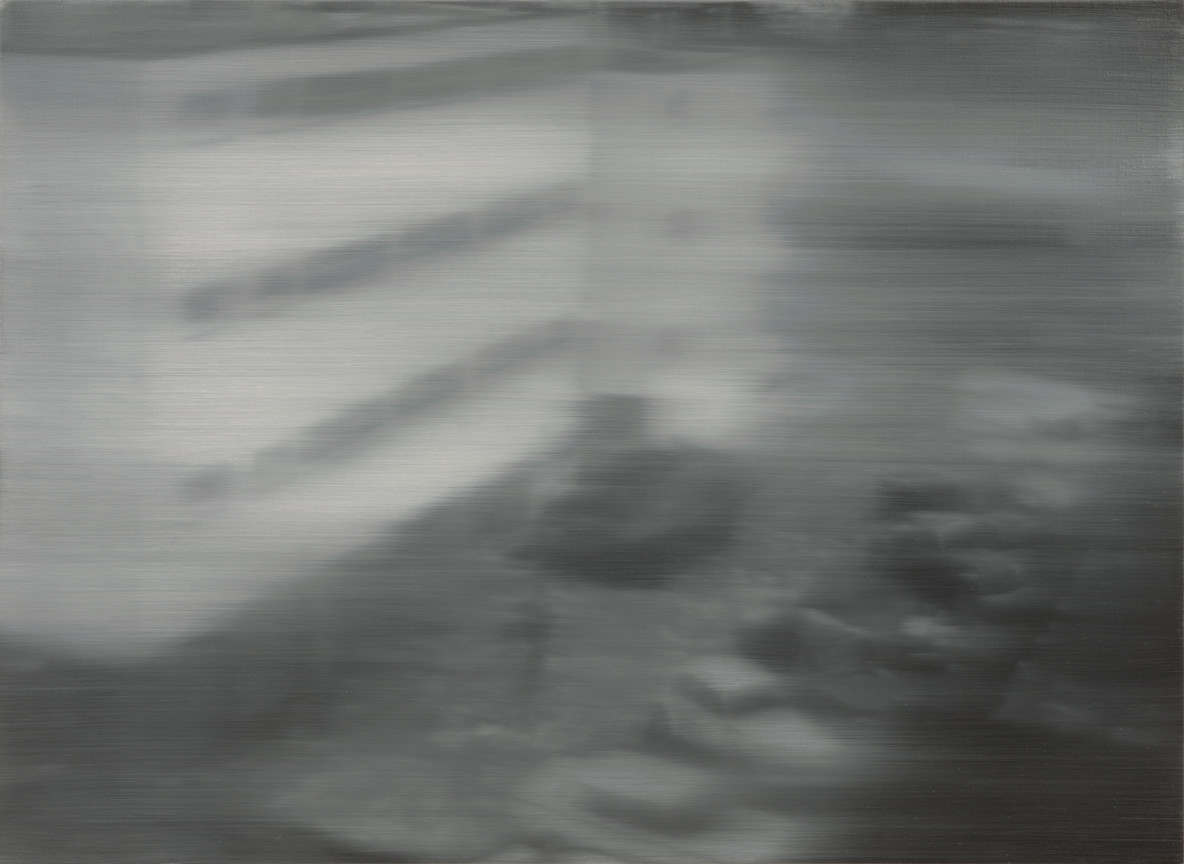 Or, to a lesser but more photographic extent: 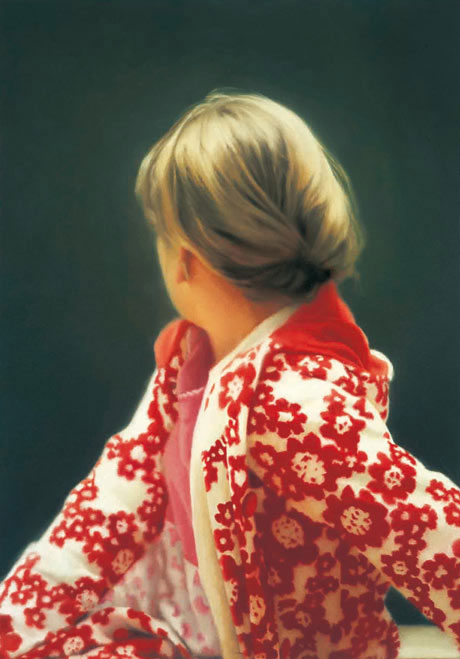 Early 20th century, artists that were part of the futurism movement, wished to portray movement. This might no be exactly what you're looking for, but it does involve blurring, as this is one of the few methods that can be used to depict movement in a static, two-dimensional image (motion blur).
An example is this work by Giacomo Balla, 'Dynamism of a Dog on a Leash': 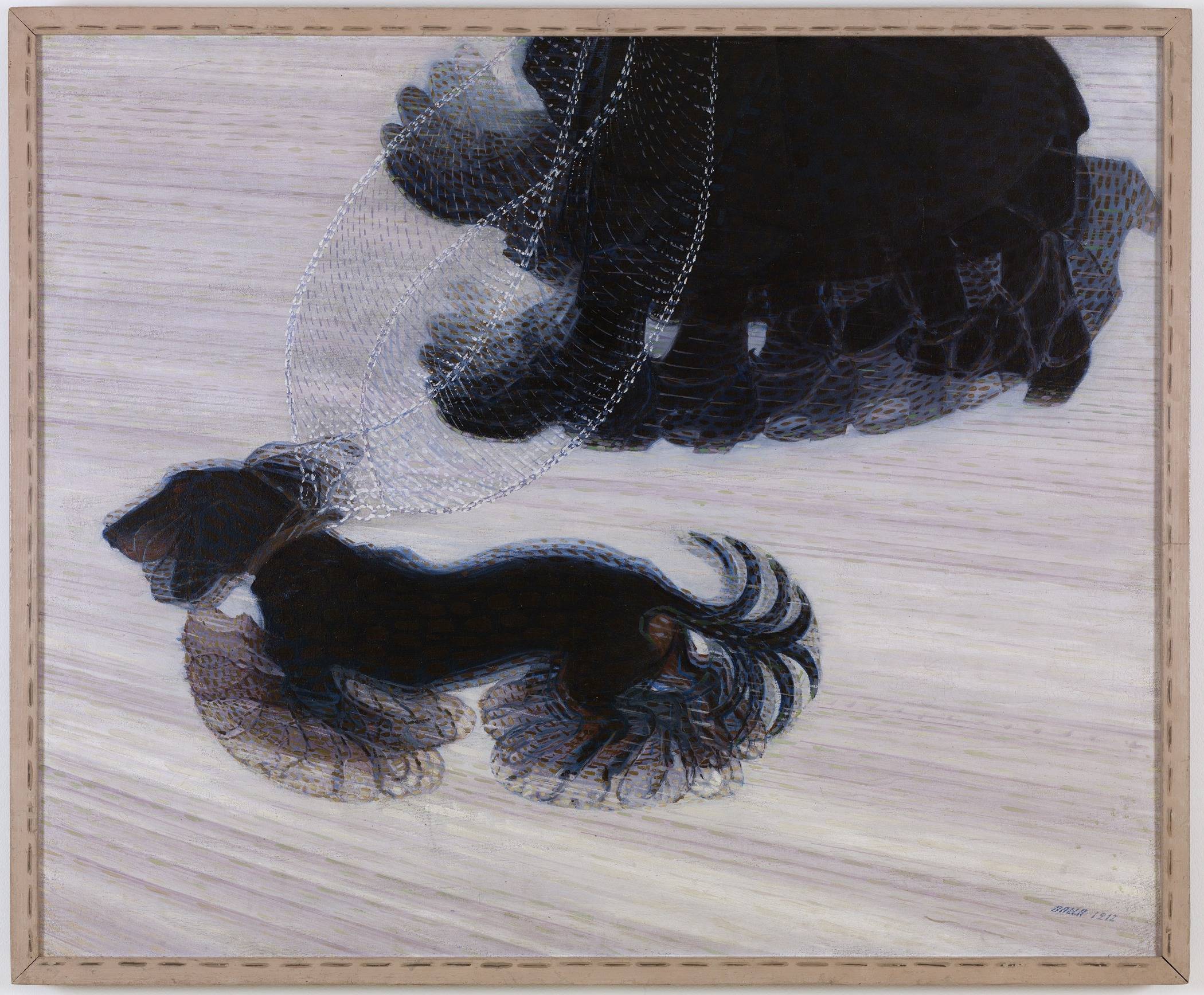 In sculpture, similar things were tried during the futurist movement. An iconic example is 'Unique Forms of Continuity in Space', by Umberto Boccioni. Again, it does not come across as blurry, because the movement - the blur - has here been solidified: 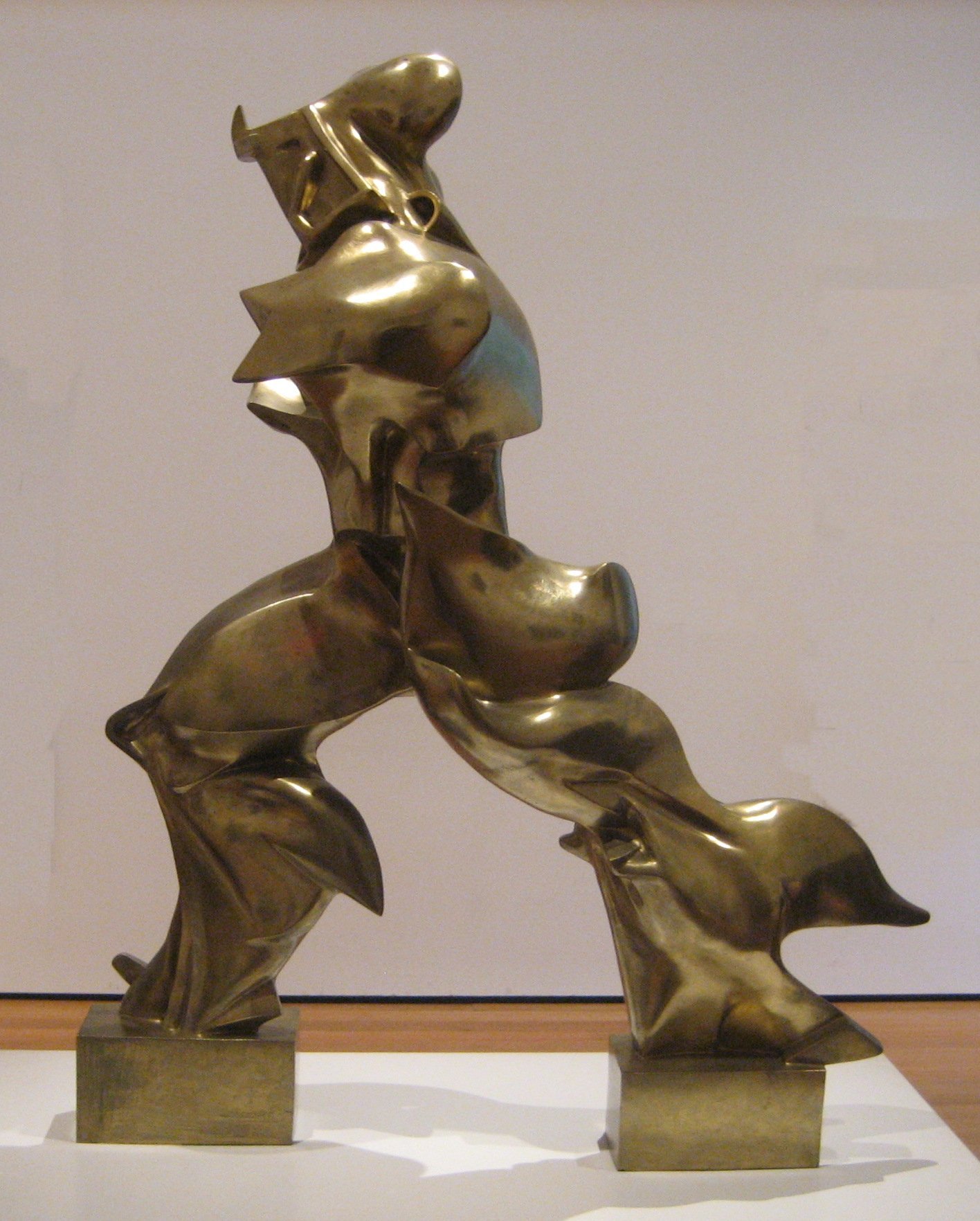 A similar, recent sculpture is made out of glass shards: 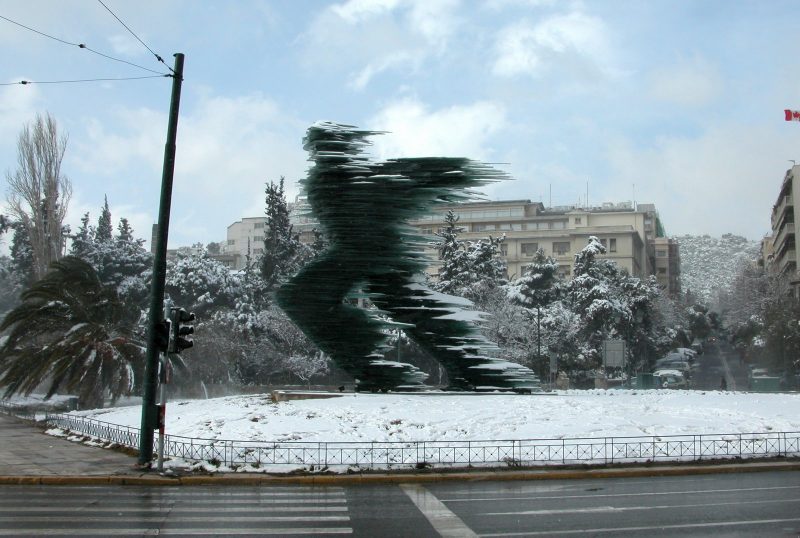 Because it's glass, the outlines are less defined, and the material even changes colour and brightness based on the environment. So not only does it depict blur, the sculpture itself is blurred against its background.

And another recent example of motion blur in sculpture is this work by Ryan Johnson, insinuating a more pixelated or artificial motion blur: 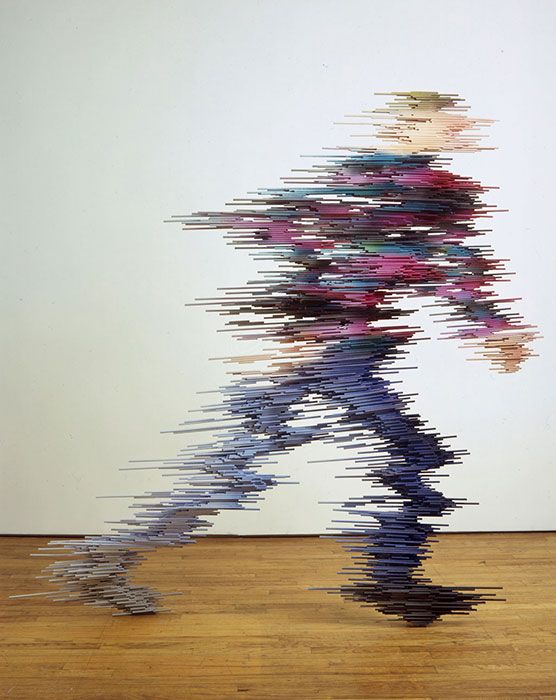 Abstraction is (mainly, arguably) a simplification of form, something that blur results in as well. The problem with sculpture is that it needs solidity, mass, and volume, whereas visual blur, as Elmy mentions, is a visual phenomenon: it's essentially non-physical, non-solid, a mental interpretation. That's why it might be hard to find what you're looking for in a three-dimensional object (although I had hoped to find some sculptures made out of fur, or a similar material, as that has a natural blurriness to it. Like this 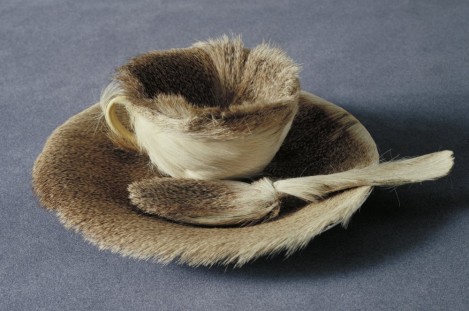 but focused more on the visual quality of fur).