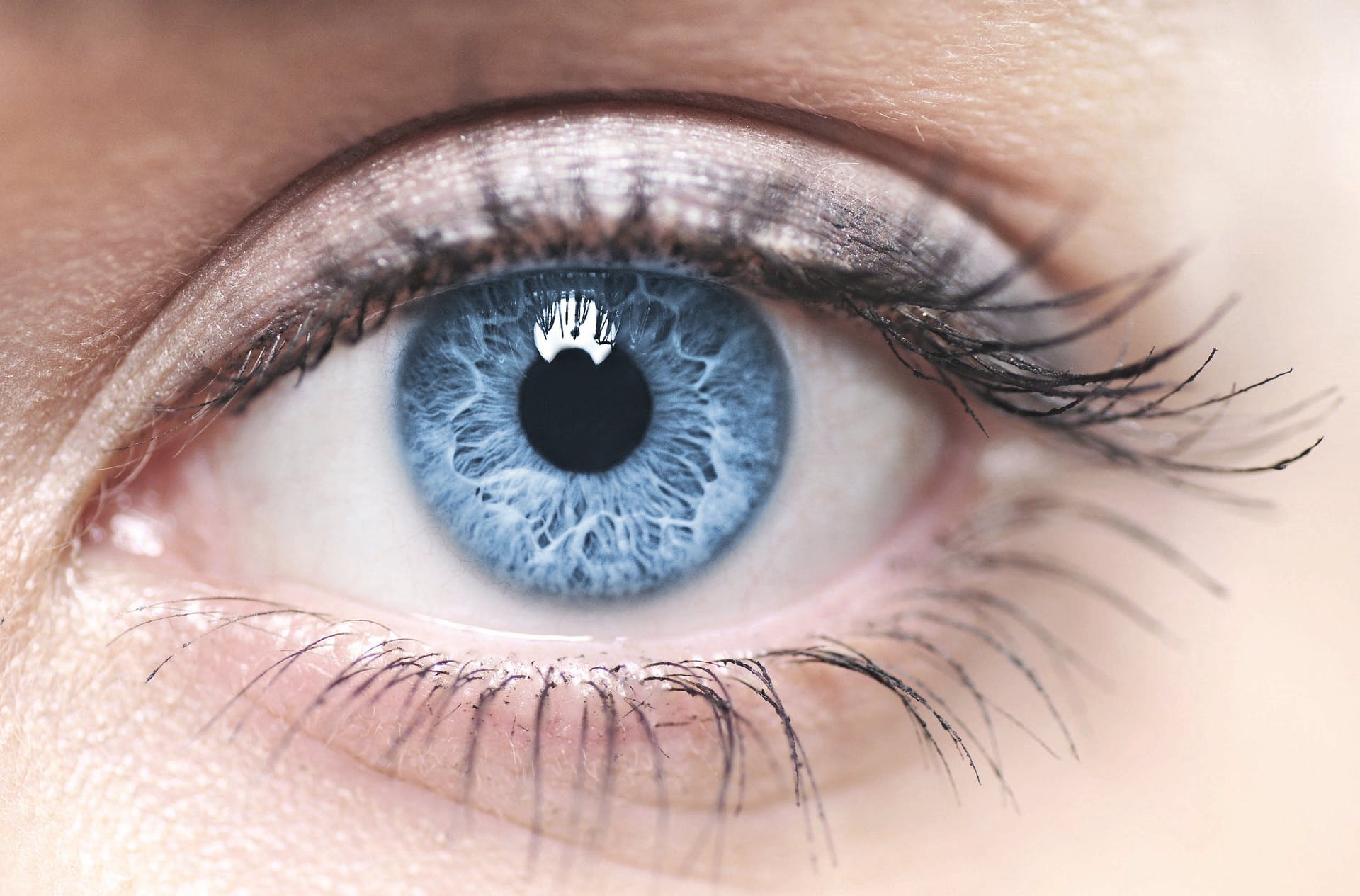 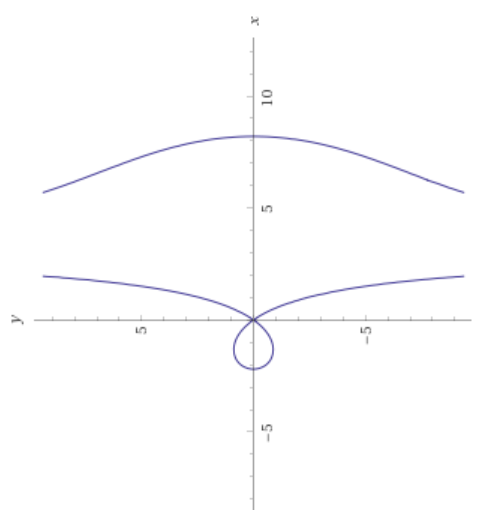 Welcome to the A&C, Code Complete.

The thing about eyes, is that all of them are not the same shape. Sometimes the eyeball can be referred to as, 'football shaped', 'almond shaped', and many different other types. Here area few different ideas below (You can even Google "Different eye shapes":

Like the image you provided above, there isn't that many 'dark lines.' in the eyeball, eyelid itself. Most of the 'dark areas' are only in the eyelashes, and pupil. If you look at the bottom eyelid there is no dark lines at all. The only dark parts you see in the bottom eyelid is the eyelashes. The corner right part of the eye is darker(where it attached to the upper lid. But is not black either. It is more of a medium brown.

Having to learn about blending and shading, tortillon AKA blending stumps can help. Also looking into drawing pencils that do not write as hard. 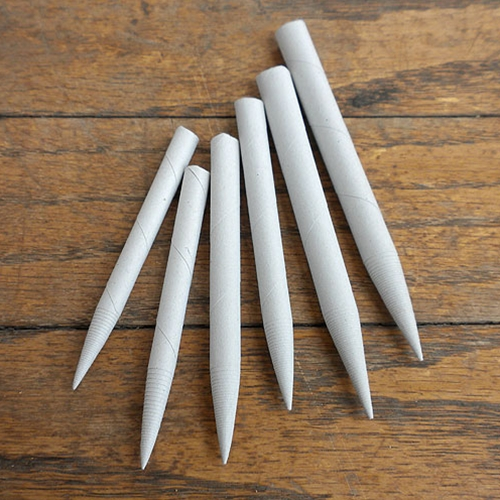 (Different hardness of drawing pencils below)

Those tools will get you in the right spot to begin to draw the human eye.

To understand eye shape, it helps to think about what creates that shape. Eyeballs are spherical. They're mostly inside the skull, but a dome of the eyeball protrudes from the eye socket. The dome is covered by a thin layer of skin with a straight slit across the diameter (eyelids). The slit is roughly, but usually not exactly, horizontal (but symmetrical). The eyelids get pulled open around the dome by muscles that open the slit from the middle, and the skin at the middle of the slit has more freedom to stretch than at the corners, so the basic shape of the opening is curved, like an arc segment of a large ellipse top and bottom.

The exact shape of the eye opening and orientation of the slit are affected by the surrounding facial structures and features, the strength of the muscles, condition of the eyelid skin, fat deposits, etc., so it's a little more complex than two arcs.

The most obvious deviation from two simple arcs is the inside (nose-side) corner. That contains a pinkish, sort of wedge-shaped nodule (lacrimal caruncle). Instead of coming to a sharp point, the upper and lower lid often do more of a tight curve around that. That results in the curve of lower lid (and sometimes the upper lid) having an inflection (reversal of the direction of the curve) at the end. Several different skin structures meet in this corner, so if you are drawing it in fine detail, there can be a lot of anatomical variation from person to person in the folds, size, and shape of that tiny spot (which means that precisely how you draw it doesn't matter that much if you aren't drawing a specific person's face).

A little more subtle deviation is that the peaks (widest spot) of the two arcs aren't the same distance from the center of the face; on the lower lid it's a little farther to the outside.

Some considerations beyond the shape of the eyelid opening

Beyond the shape of the eyelid opening, a prominent variation is the fold of the upper eyelid (or in some cases, almost no visible fold, which would be drawn with just shading). This contributes a lot to the differences in eye appearance. There are a number of common variations, some influenced by heredity, aging, or medical conditions. The "hooded" eye shape in Lyssagal's answer is largely due to the eyelid fold, and often develops with age. There are discussions online that go into detail that can be found by Googling "eyelid fold".

As Lyssagal's answer describes, common human variations and conditions, and to some extent things like race, result in some general eye shapes, but the exact shape is a continuum. If you start with the principles driving eye shape, you can vary the details quite a bit and there will be someone somewhere with eyes that look similar to what you draw. You can sketch a general shape and if it doesn't match the shape you're trying for, adjust the aspect that doesn't look right. Comparing it to pictures of actual eyes will help to identify what's off.

Keep in mind that all of this describes "at rest" open eyes. The shape of the eye opening, as well as the surrounding features, like eye brows, forehead, and cheeks, are affected by emotional expressions (and other things). Beyond just placing eye shapes properly on the face, fine tuning will let the face express emotion.

That said, holding your eyeballs in a rotated position is hard; the muscles weren't designed for that. To gaze at something that isn't straight ahead, you quickly adjust your head or body so that it is. So off-center pupils would indicate more of a glance at something, like instinctively responding to something that appears in peripheral vision.

When you're drawing both eyes, there is also an influence of stereoscopic vision. If the person is looking at something in the distance that isn't straight ahead, the pupils of both eyes will be off-center (left/right and/or up/down), in the same direction and by the same amount. If the person is looking at something close to their face, the pupils will be close to the vertical middle of the eye, but both off-center horizontally a little toward the nose (the closer the object is to their face, the more cross-eyed).

Pulling all that together into something "algorithmic", I'd suggest something like this as a starting point for the shape:

That gives you a starting point for a basic eye shape. You can modify and fine-tune the shape from there. The lower lid is often slightly more sharply curved at its peak than the upper lid. The upper lid usually covers more of the iris than the lower lid.

When you draw in the iris and pupil, they are often not in the vertical center of the eye opening. People often assume a posture where their head is tilted slightly forward and then they look "up" a little to see straight ahead, and shorter people look up a little for eye contact when talking to someone taller. In those cases, the bottom of the pupil will rest on the "horizontal" centerline instead of being vertically centered on it.

Here's an example of this approach. 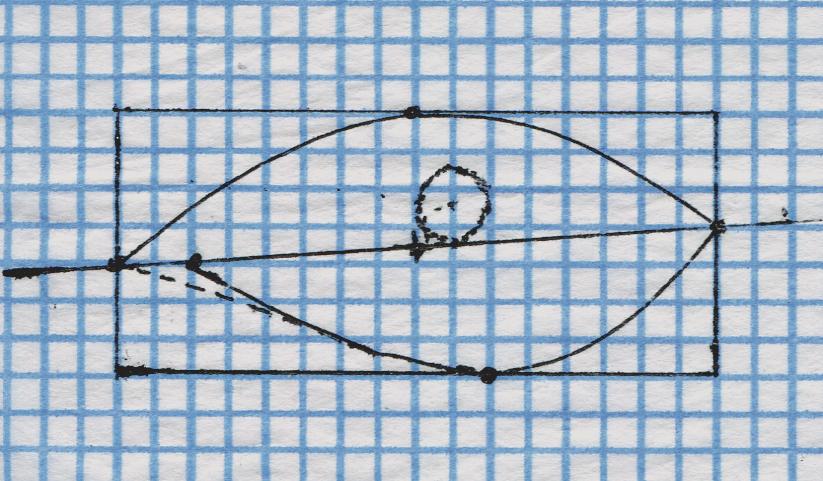 I took the proportions from the picture of the eye in the question to see how closely the algorithm replicates the shape of that eye as a starting point. I used a pen on some graph paper and a piece of cardboard as a spline to create the arcs. Here's the procedure I used:

As a starting point, the three arcs give an almost perfect match to the eye in the picture. Eyes of other shapes would require a little more adjustment and cleanup, but this is a good starting point because it's based on the mechanics that drive the basic shape of the opening.

To start, it's good to have a concept of the anatomy of an eye.

Basically, the eye is a sphere:

It lies at the centre of the eye socket or orbit of the skull, out of which it protrudes partially (the shading on the eye ball is meant to demonstrate this):

Like all images here, some parts are exaggerated, and this render should not be regarded as anatomically correct

Around the eyeball, stretching beyond the orbit on all sides, there is a sphincter, a muscle that (partially) controls the aperture of the eye. This is a layer of skin that is like :

On top of that there is skin, most importantly both eyelids, which join on either side of the eye. The eyelids are most decisive for the way an eye appears to us:

To draw this basic setup, imagine a sphere through which an imaginary line crosses (fig. I). Mark the points where this line exits the sphere, and imagine slicing about 1/8th of the sphere from one point to the next (fig. II - don't think about the comparison too much, though), and mark those cutting lines. This is that typical almond shape of the eye. When at this point you draw the iris, these lines - the inner edges of the rims of the eyelids - will adjust their shapes to it (fig. III, and the adjacent image):

These lines - the edges of the eyelids - are three-dimensional, so we add an additional line to each one, as they curve outward from the eye (fig. IV). When these are all in place, the basic construction is finished, and we can add detail and shading (fig. V):

These details consist most notably of

The way the eye reflects light is beautifully indicated by some old statues, which 'invert' the pupils to simulate light hitting the cornea: