For the origins of "cartesian" axes, see also the post : Cartesian coordinate system in Newton's work as well as the post : When do we see for the first time the use of the Cartesian plane ?

The anecdote is like this, but how accurate it is seems questionable.

While at La Flèche, Descartes suffered health problems and because of this, his teachers allowed Descartes to stay in bed for most of the morning. ... The story goes that one day when Descartes was in bed, he noticed a fly crawling around on the ceiling. He tried to think of ways to describe where the fly was located and realized that he could do so by describing the fly’s position by its distance from each wall. 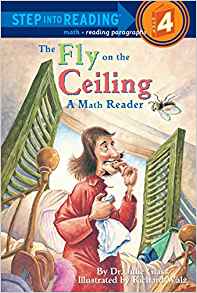 Here is the story, for beginning readers.