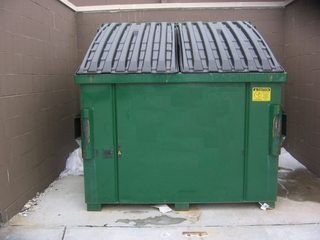 If you can't modify the dumpster, perhaps you can modify the area around it? With some ingenuity and planning you could build a frame that is easily removable for day use, and pickup, but at night becomes a locking mechanism around the receptacle.

By using a 4x4 post, which is quite heavy, and laying it across the top of the covers, it would eliminate the critters ease of lifting the arm and getting into the dumpster. if you can manage to "lock" it into place with side walls, then you eliminate their ability to move it. If it doesn't move, and isn't easily lifted, they may give up and move on to the neighbors waste area.

Here's what I ended up building to keep the raccoons out: 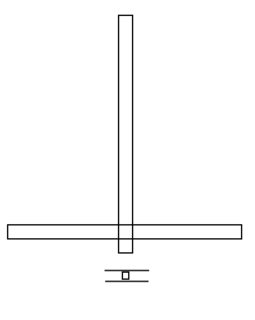 This eliminates the gap between the two lids and still allows the lids to be opened, but as one one large lid rather than two small ones.

With the two lids now moving as one piece the raccoons can't open it because they can't lift the lid while standing on top of it and they can't reach the lid from the ground.

It's working well so far, although the raccoons haven't given up yet...

I'll snap some photo's of the finished piece and add them here when I get a chance.

We never throw organic material away. We put a little effort into sorting the waste, and we end up with very little actual garbage, nothing that would attract animals as edible food. 85% is usable or recyclable. The organic material is heaped into our compost pile or buried.

If you must put the organic matter into the dumpster, douse it with some fluid that would destroy the scent and/or make it unusable as food.

Another option is to use a Have a Heart trap. Set a few next to the dumpster, or away form the dumpster and put peanut butter as bait. Just take the trap with the live raccoon and release to a suitable ecosystem more than 3 miles away.

Also, the waste management company should be obligated to provide you with a tamper-proof dumpster. Check with your township.

I have glued a stick against the center of the front wall so they can climb out on their own. It doesn't show and really doesn't really hurt the dumpster. Anything they can climb on will work as long as it reaches from the bottom to the top They are good climbers, so many types of things will work. I hope people will pass this idea along because it will save millions of raccoons.