You definitely don't want to just pull the plug. This can cause problems with the SD card and file system.

From the command line

When using the command line or a terminal window, you can enter the following to do a clean shutdown:

From the LXDE GUI

Once it says System halted, you can remove the power cord if needed.

It's best to always shutdown correctly if you can.

Constantly unplugging the device without shutting down gracefully may have undesireable effects on the SD card (a temperamental object already).

For reference, to shut down from the terminal you can use:

These commands send SIGTERM to all running processes, notifying them to save their data and exit. It then sends SIGKILL to all remaining processes to halt the system, followed by finally unmounting all filesystems. The screen will then show System Halted and you can pull the plug.

Other considerations aside, the power, and other, connectors will be designed for a limited number of insert/disconnect cycles. Often this is a surprisingly low number.

Statistically connectors are a very likely source of equipment failure.

With a view to the overall longevity of your Pi, you might want to moderate the number of connector insert/disconnects it experiences. One way of helping to do this would be to use the mains supply socket's on/off switch.

You don't really need a power switch for your Raspberry Pi. I use a USB hub for the power supply that has on/off switches. So, whenever I want to turn off the Raspberry Pi, I just turn the USB switch off.

I followed the project described in Raspberry Pi Shutdown Switch – Safely Turning off the Pi, but set pin 17 to be internally pulled up. Then connect the wires like the above project, but leave out any resistors and add the following Python script in /etc/rc.local:

There is also a GPIO board called the Pi Supply that has an on switch, power management and hard off for lock ups. It is also useful if your plug is behind the TV and hard to get to. You still need to shut down normally, but it then powers off the Raspberry Pi.

If you're concerned about wearing the power micro USB port out in normal usage you can get a male-to-female USB adapter and plug your power supply in to that.

This is not very hard. Go into the command prompt, and type sudo halt. Enter your password if needed. Once there is nothing on the screen, pull the plug.

I've used that shutdown.py solution too.

You'll still need to find a physical switch and solder it to pins 6 and 8 of header 5. I took mine from an old broken Arduino board. I've also drilled a small hole in the case to make sure that I can push the button with a small wooden pin when the case is closed. 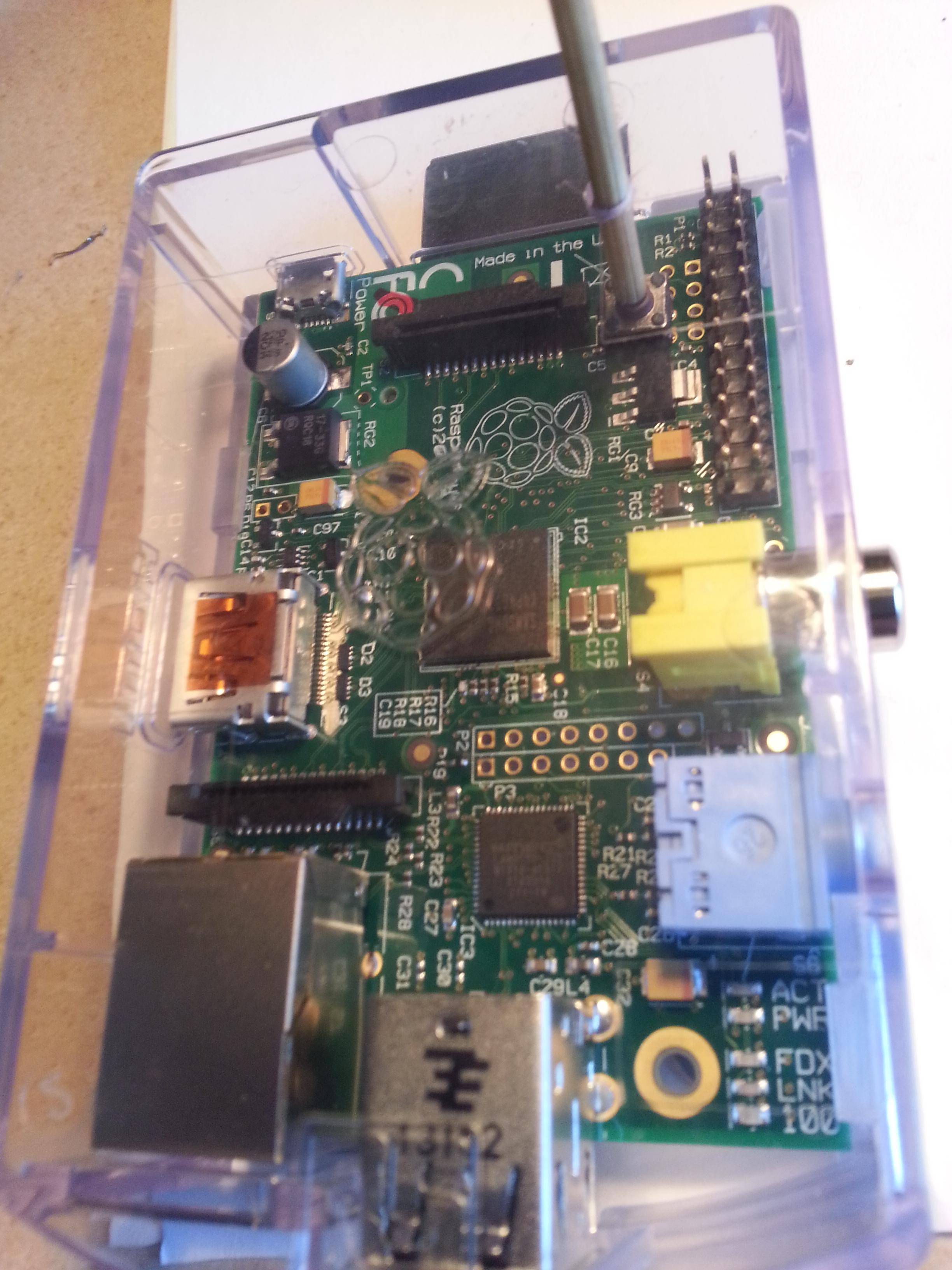 To avoid the SD card corruption issues you should always shut down the OS properly. You can automate this by using a power controller hardware solution and a script that is triggered through a GPIO port signal, for example (in addition to the Pi Supply mentioned above):

The RemotePi Board in the last link has the added functionality of using IR remotes to power on/off the Raspberry Pi.

I log into my Raspberry Pi remotely, and here is how I shut it down:

Since I use a remote display, I don't necessarily see the final output of the Raspberry Pi in the command window, which is why I use the activity lights. The non-blinking state of the LEDs is not an absolute indication of a complete successful shutdown, but it has worked well enough for me.

You should only pull the plug, if the green led is off. The green led flashes, if the machine is writing to the sd card.

The normal unix commands work with Linux, like so:

init 0 will shut it down so it is safe to pull the plug.

Unlike unix, there is no real need to do sync; sync; before shutting down. But simply pulling the plug can cause errors, so be sure to use shutdown or init 0 before disconnecting power. If you do happen to interrupt power unexpectantly, use fsck to check for and/or fix any problems that might arise.

There might be a case to do the full sync; sync; sync; sleep 30; halt if you have an external file system that does not unmount cleanly. You'd know if this is a problem by running fsck on external filesystems right after booting. If it is finding problems then you might want to do the whole thing. But I have never seen this happen with my Rpi3.

Always use a command to power down and shut off your Raspberry Pi. I use sudo halt like alot of other users. I recommend backing up your SD card I accidentally unplugged mine and corrupted the image somehow. It is easier to shutdown than burn a new image and starting over

There is multiple ways to power the pi off! Just pulling the plug without proper shutdown could corrupt your SD card!

Note: You can also press the raspberry pi button and then click power. Then shutdown or reboot as well which shutdown and restart are both immediate!

As described in some of the other answers on this post:

Will also work: once there is nothing on the screen just pull the plug!

If your Raspberry Pi is frozen then you can not enter to ssh or console, then this helps. I was broke my few SD cards before knew this:

Hold down both Alt+PrintScreen, and while holding those keys, hit the following keys in sequence, one at a time, with a few seconds pause between them.

A handy mnemonic to remember that is, Reboot Even If System Utterly Broken.

Substitute "O" for "B" to shut down the system instead of rebooting (O=off, B=boot).