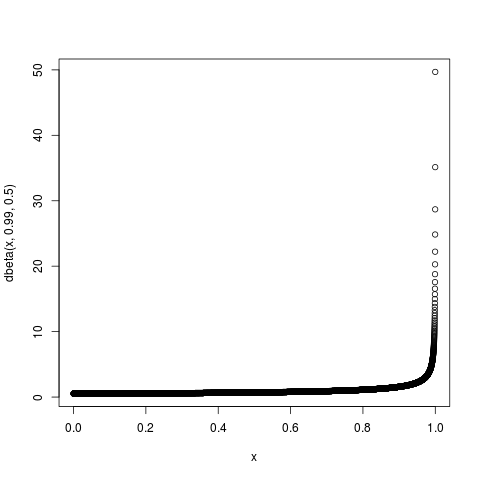 A Beta distribution is used to model things that have a limited range, like 0 to 1.

Examples are the probability of success in an experiment having only two outcomes, like success and failure. If you do a limited number of experiments, and some are successful, you can represent what that tells you by a beta distribution.

Another example is order statistics. For example, if you generate several (say 4) uniform 0,1 random numbers, and sort them, what is the distribution of the 3rd one?

I use them to understand software performance diagnosis by sampling. If you stop a program at random $n$ times, and $s$ of those times you see it doing something you could actually get rid of, and $s>1$, then the fraction of time to be saved by doing so is represented by $Beta(s+1, (n-s)+1)$, and the speedup factor has a BetaPrime distribution.

The short version is that the Beta distribution can be understood as representing a distribution of probabilities, that is, it represents all the possible values of a probability when we don't know what that probability is. Here is my favorite intuitive explanation of this:

Why is your batting average in the first few hits not a good predictor of your eventual batting average? When a player's first at-bat is a strikeout, why does no one predict that he'll never get a hit all season? Because we're going in with prior expectations. We know that in history, most batting averages over a season have hovered between something like .215 and .360, with some extremely rare exceptions on either side. We know that if a player gets a few strikeouts in a row at the start, that might indicate he'll end up a bit worse than average, but we know he probably won't deviate from that range.

Given our batting average problem, which can be represented with a binomial distribution (a series of successes and failures), the best way to represent these prior expectations (what we in statistics just call a prior) is with the Beta distribution- it's saying, before we've seen the player take his first swing, what we roughly expect his batting average to be. The domain of the Beta distribution is (0, 1), just like a probability, so we already know we're on the right track, but the appropriateness of the Beta for this task goes far beyond that.

We expect that the player's season-long batting average will be most likely around .27, but that it could reasonably range from .21 to .35. This can be represented with a Beta distribution with parameters $\alpha=81$ and $\beta=219$: 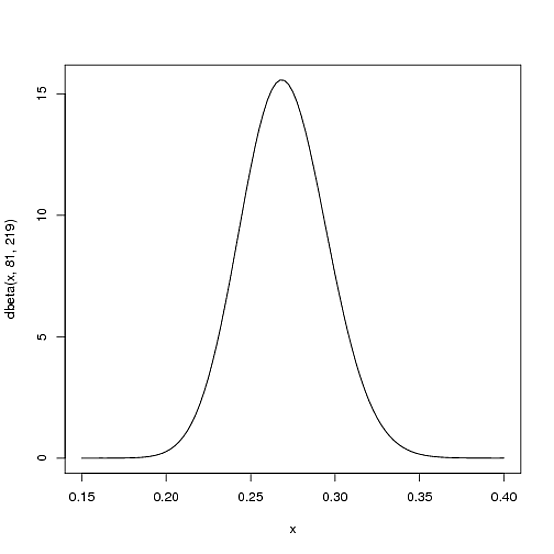 I came up with these parameters for two reasons:

But here's why the Beta distribution is so appropriate. Imagine the player gets a single hit. His record for the season is now 1 hit; 1 at bat. We have to then update our probabilities- we want to shift this entire curve over just a bit to reflect our new information. While the math for proving this is a bit involved (it's shown here), the result is very simple. The new Beta distribution will be: 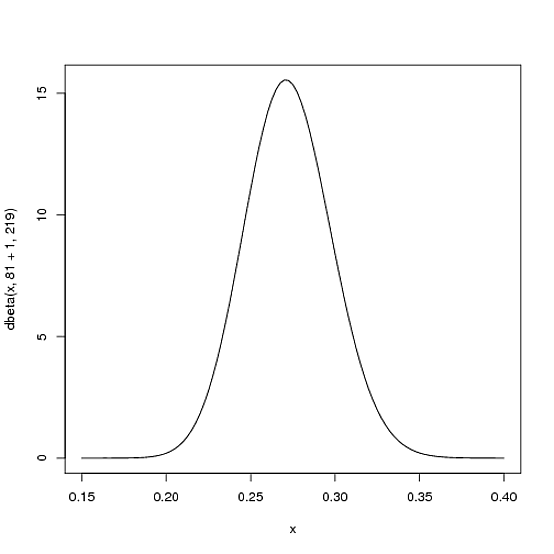 Notice that it has barely changed at all- the change is indeed invisible to the naked eye! (That's because one hit doesn't really mean anything).

However, the more the player hits over the course of the season, the more the curve will shift to accommodate the new evidence, and furthermore the more it will narrow based on the fact that we have more proof. Let's say halfway through the season he has been up to bat 300 times, hitting 100 out of those times. The new distribution would be $\mbox{Beta}(81+100, 219+200)$, or: 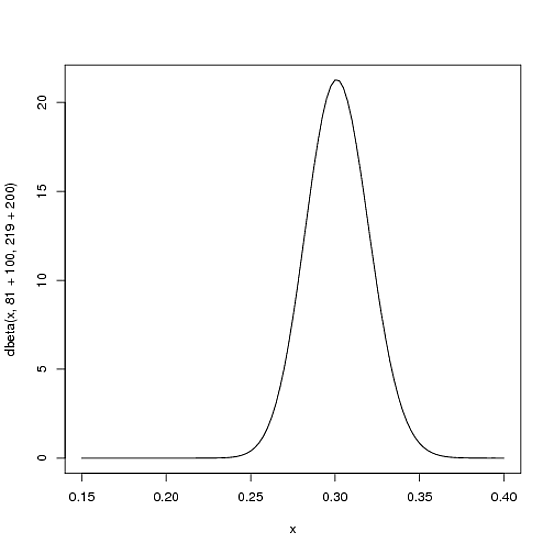 Notice the curve is now both thinner and shifted to the right (higher batting average) than it used to be- we have a better sense of what the player's batting average is.

Thus, the Beta distribution is best for representing a probabilistic distribution of probabilities: the case where we don't know what a probability is in advance, but we have some reasonable guesses.

There are two principal motivations:

First, the beta distribution is conjugate prior to the Bernoulli distribution. That means that if you have an unknown probability like the bias of a coin that you are estimating by repeated coin flips, then the likelihood induced on the unknown bias by a sequence of coin flips is beta-distributed.

The beta distribution is not special for generally modeling things over [0,1] since many distributions can be truncated to that support and are more applicable in many cases.

The Beta distribution also appears as an order statistic for a random sample of independent uniform distributions on $(0,1)$.

This result shows that the Beta distributions naturally appear in mathematics, and it has some interesting applications in mathematics. 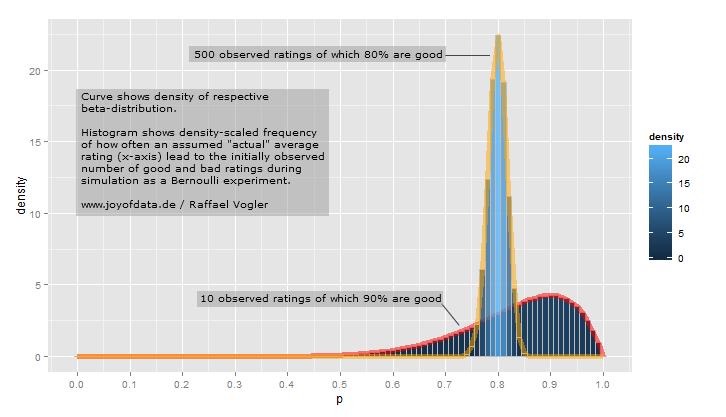 Let's assume a seller on some e-commerce web-site receives 500 ratings of which 400 are good and 100 are bad.

We think of this as the result of a Bernoulli experiment of length 500 which led to 400 successes (1 = good) while the underlying probability $p$ is unknown.

The pointy bar plot in the picture represents the frequency of how often it happend in a simulation that for a given assumed "true" $p$ 400 of 500 ratings were good. The bar plot is the density of the histogram of the result of the simulation.

And as you can see - the density curve of the beta distribution for $\alpha=400+1$ and $\beta=100+1$ (orange) tightly surrounds the bar chart (the density of the histogram for the simulation).

So the beta distribution essentially defines the probability that a Bernoulli experiment's success probability is $p$ given the outcome of the experiment.

The beta distribution is very useful when you are working with particle size distribution. It is not the situation when you want to model a grain distribution; this case is better to use Tanh distribution $F(X) = \tanh ((x/p)^n)$ that is not bounded on the right.

The transformation is very easy if you have regular shapes, i.e., a sphere or a prism. You ought to add three units to the alpha parameter of the number beta distribution and get the volume distribution.

My intuition says that it "weighs" both the current proportion of success "$x$" and current proportion of failure "$(1-x)$": $f(x;\alpha,\beta) = \text{constant}\cdot x^{\alpha-1}(1-x)^{\beta-1}$. Where the constant is $1/B(\alpha,\beta)$. The $\alpha$ is like a "weight" for success's contribution. The $\beta$ is like a "weight" for failure's contribution. You have a two dimensional parameter space (one for successes contribution and one for failures contribution) which makes it kind of difficult to think about and understand.

So far the preponderance of answers covered the rationale for Beta RVs being generated as the prior for a sample proportions, and one clever answer has related Beta RVs to order statistics.

Gamma RVs already have their rationale in modeling arrival times for independent events, so I will not address that since it is not your question. But a "fraction of time" spent completing one of two tasks performed in sequence naturally lends itself to a Beta distribution.

I don't know what they call the prior assumption of 81 hits and 219 outs but in English, that's the a priori assumption.

I wonder if the Laa of Large Numbers eventually takes hold and drives the batting average back to .270.

To guesstimate the alpha and beta in general one would take the complete number of prior occurrences (at bats), the batting average as known, obtain the total hits (the alpha), the beta or the grand total minus the failures) and voila – you have your formula. Then, work the additional data in as shown.

I think there is NO intuition behind beta distribution! The beta distribution is just a very flexible distribution with FIX range! And for integer a and b it is even easy to deal with. Also many special cases of the beta have their native meaning, like the uniform distribution. So if the data needs to be modeled like this, or with slightly more flexibility, then the beta is a very good choice.

In another question concerning the beta distribution the following intuition behind beta is provided:

For details please checkout the full answer at https://stats.stackexchange.com/a/429754/142758

Most of the answers here seem to cover two approaches: Bayesian and the order statistic. I'd like to add a viewpoint from the binomial, which I think the easiest to grasp.

The intuition for a beta distribution comes into play when we look at it from the lens of the binomial distribution.

The Intuition behind the shapes

The PDF of Beta distribution can be U-shaped with asymptotic ends, bell-shaped, strictly increasing/decreasing or even straight lines. As you change $\alpha$ or $\beta$, the shape of the distribution changes. 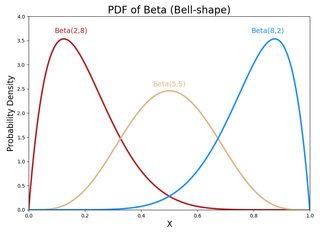 Notice that the graph of PDF with $\alpha = 8$ and $\beta = 2$ is in blue, not in read. The x-axis is the probability of success. The PDF of a beta distribution is approximately normal if $\alpha +\beta$ is large enough and $\alpha$ & $\beta$ are approximately equal. 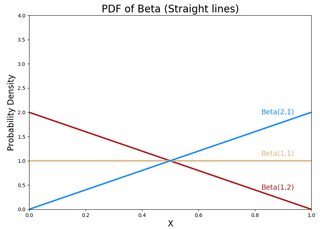 The beta PDF can be a straight line too. 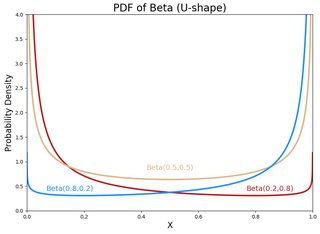 The Intuition behind the shapes

Also, Beta(1,1) would mean you got zero for the head and zero for the tail. Then, your guess about the probability of success should be the same throughout [0,1]. The horizontal straight line confirms it.

Why is it U-shaped? What does it mean to have negative (-0.5) heads and tails? I don’t have an answer for this one yet. I even asked this on Stackexchange but haven’t gotten the response yet. If you have a good idea about the U-shaped Beta, please let me know!

There are already so many awesome answers here, but I'd like to share with you how I interpret the "probabilistic distribution of probabilities" as @David Robinson described in the accepted answer and add some complementary points using some very simple illustrations and derivations.

Beta distribution $\text{Beta}(\theta|\alpha_H, \alpha_T)$ can address the three problems where $\theta$ represents the density over the interval [0, 1], $\alpha_H$ the times heads occur and $\alpha_T$ the times tails occur here.

For the issue a, we can assume before flipping the coin that heads and tails are equally likely by either use a probability point and saying that the chance of occurring heads is 50%, or employing the Beta distribution and setting the prior as $\text{Beta}(\theta|1, 1)$ (equivalent to the uniform distribution) meaning two virtual tosses(we can treat the hyperparameter (1, 1) as pseudocounts) and we have observed one head event and one tail event (as depicted bellow). 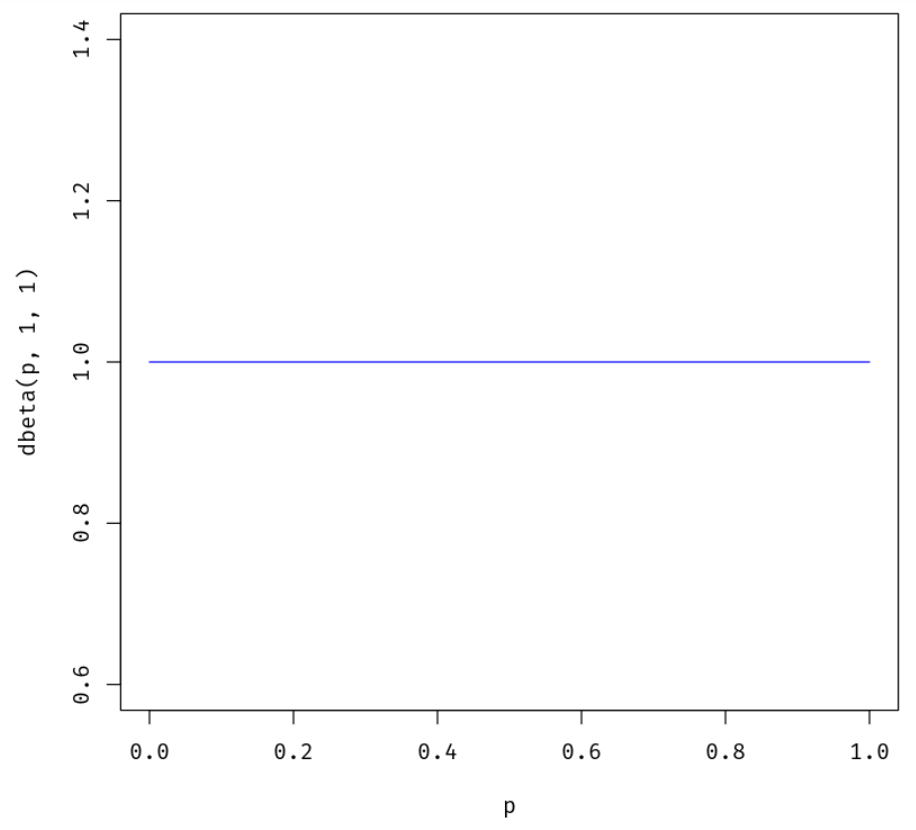 In fact we can bridge the two methods by the following derivation: 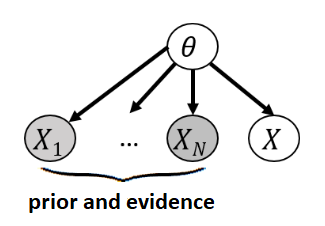 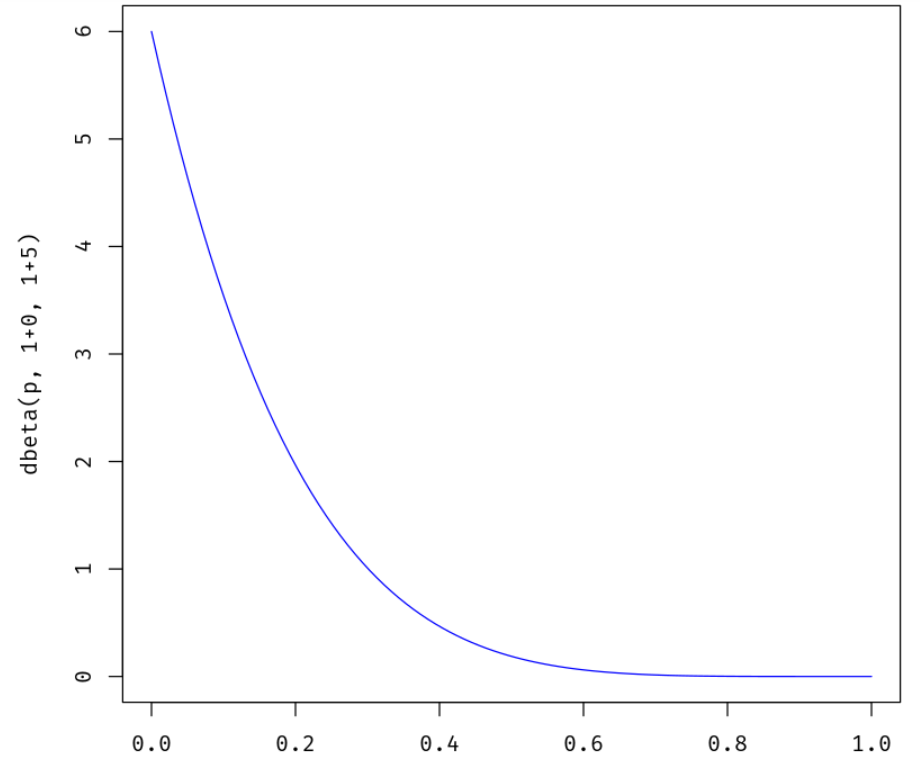 We see the distribution over all probabilities of getting a head the density is high over the low probabilities but never be zero we can get otherwise, and the expectation is $E[\text{Beta}(\theta|1+0, 1+5)] = \frac{1+0}{1+0+1+5}$ (the Laplace smoothing or additive smoothing) rather than 0/impossible (in issue b).

For the issue c, we can calculate the two posteriors (along the same line as the above derivation) and compare them (as with the uniform as prior). When we get three heads and two tails we get $\text{Beta}(\theta|\mathcal{D}, \alpha_H, \alpha_T)=\text{Beta}(\theta|1+3, 1+2)$ 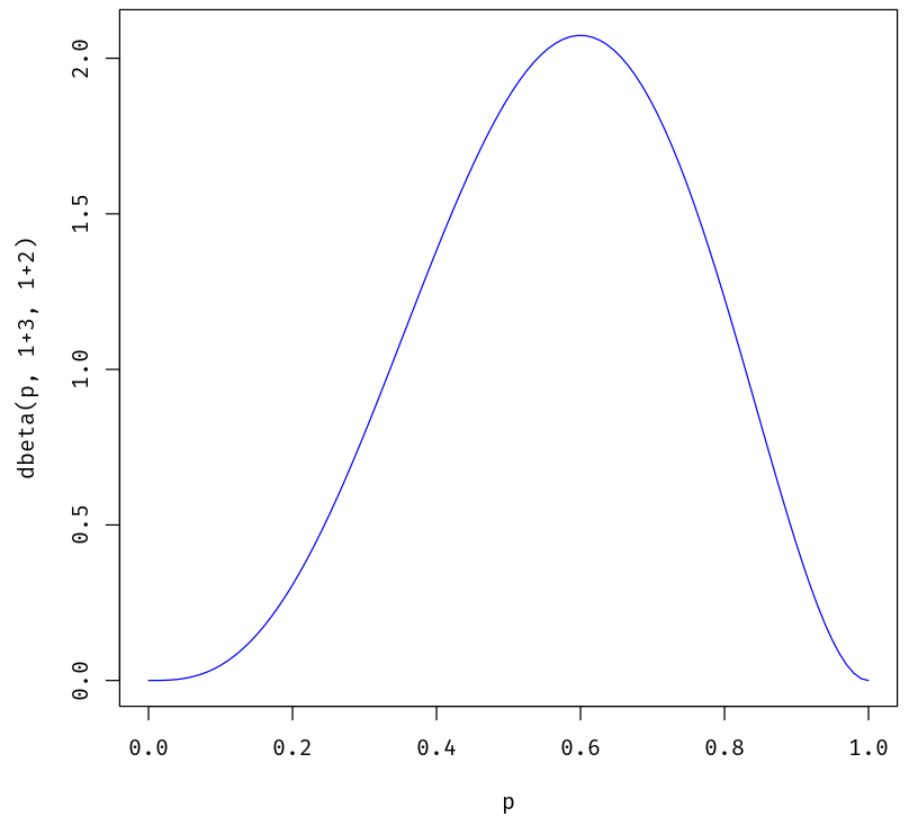 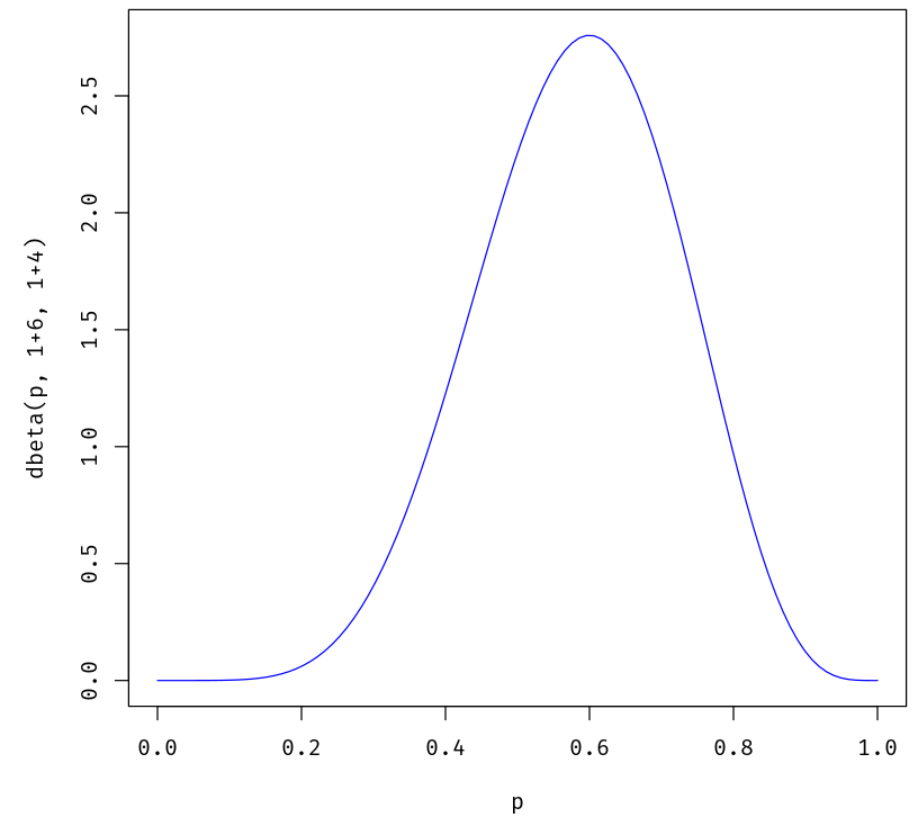