Tides are fairly predictable even in the case of multiple bodies. Assuming that all of the moons orbit the planet in times that take longer than a day, the tides will have a period of 1/2 of a day (much like our 12 hour tide cycle on earth).

Every gravitational body generates a tide on the line connecting the center of the two bodies. The bulge is on the near side and the far side. If you add a second moon, this would again make a tidal bulge on its respective center-connecting line. These two tidal effects would superimpose on top of each other. So when the two moons are in phase (both are directly overhead at the same time of night), their tidal effects would add. When the moons are out of phase (one is just cresting the horizon when the other is overhead) the effects would partially cancel. The strength of each effect depends on the mass and distance to the moon. Adding more moons would add another superposition.

Of course this is a first order approximation. The shapes of the bodies of water, landmasses, depths, and frequencies of orbit all have higher order effects, but depending on your purpose, these effects may be negligible.

Our tide would be affected and so would be light distribution of Earth.

What if the Earth had Two Moons? This article appears to be very similiar to what you are talking about. But this is saying what would happen if a another moon came to Earth.

Humans would have to adapt to the challenges of this two-mooned Earth. The higher tides created by Luna would make shoreline living almost impossible — the difference between high and low tides would be measured in thousands of feet.

The combined light from the Moon and Luna would make for much brighter nights, and their different orbital periods will mean the Earth would have fewer fully dark nights.

Eventually, the Moon and Luna would collide; like the Moon is now, both moons would be receding from Earth. Their eventual collision would send debris raining through Earth’s atmosphere and lead to another mass extinction.

So from that we can say that multiple moons would enhance the affect on the tides of Earth without really cancelling out anything.

So from that I would say that if many moons were next to one planet the affect would be minimum as they would be used to it. The only extra thing would be that maybe the life on their planet would look different due to extra gravitational pull exerted by many moons.

You can model the effect of two moons by summing two sine waves. To do this plot each moon as a function of Time and manipulate the gravity of the moon by changing the amplitude and the orbital period by multiplying the time variable.

A final plot showing the summation of the others gives the resulting forces on the tides.

In reality calculating tides is VERY complicated, it depends on many factors involving river emptying into the sea, the terrain around the shore, currents, weather etc... However, we can come up with a rough approximation which will at least help us get a feel for how the tides would work.

The first thing to establish is whether the moons would have to have the same orbital period (do they both take either same amount of time to orbit the planet?) the answer is no, Europa has an orbital period of 85 hours and Ganymede of 172 hours. This means each moon can be independent to each other.

Next you need to determine whether both moon are on the orbital plane, I would suggest they are. After all the planets in the solar system orbit on the same plane and it keeps the maths easier.

So you've got two moons of different masses orbiting at different periods. You can represent this very easily as a graph with two sine waves on it. The high tides on any given day are the cumulative force from the moons.

Next all you need to do is decide the maximum and minimum tide heights and scale the graph accordingly. Using this technique you not only get a feel for what the tides would look like but also can calculate down to the day when the high tides will be.

In the example below there are two moons (Green and Red) on the graph, the net impact of these moons is shown in blue. As you can see one moon dominates the tides fairly dramatically (because it's significantly bigger) but the red moon has enough impact to warp the tides a little. I mocked this up with FooPlot: 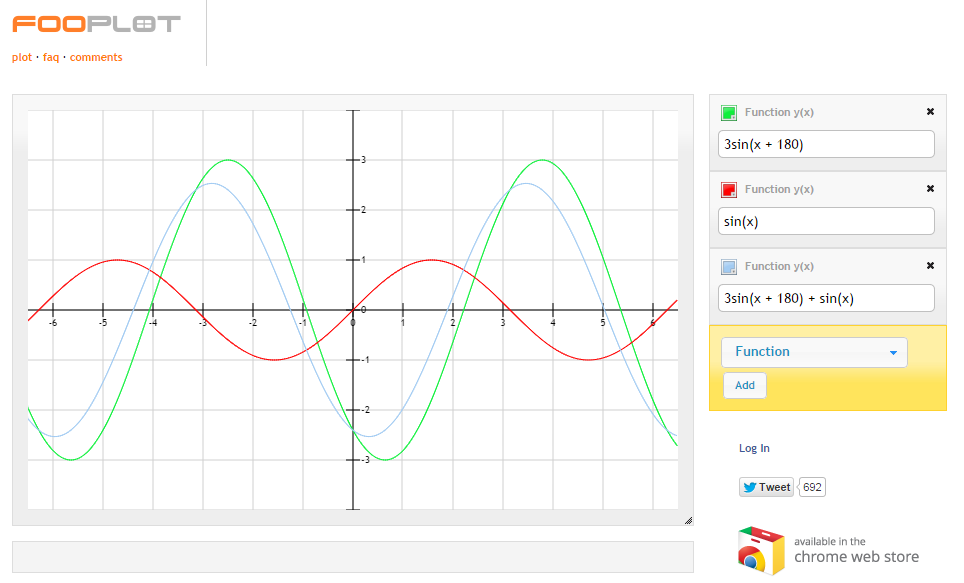 For sheer curiosity I've messed with the orbital period of the red moon — now you can see very dramatic impacts on the tide line (blue). It looks like tides with this lunar configuration have much longer low tides which suddenly rush in. 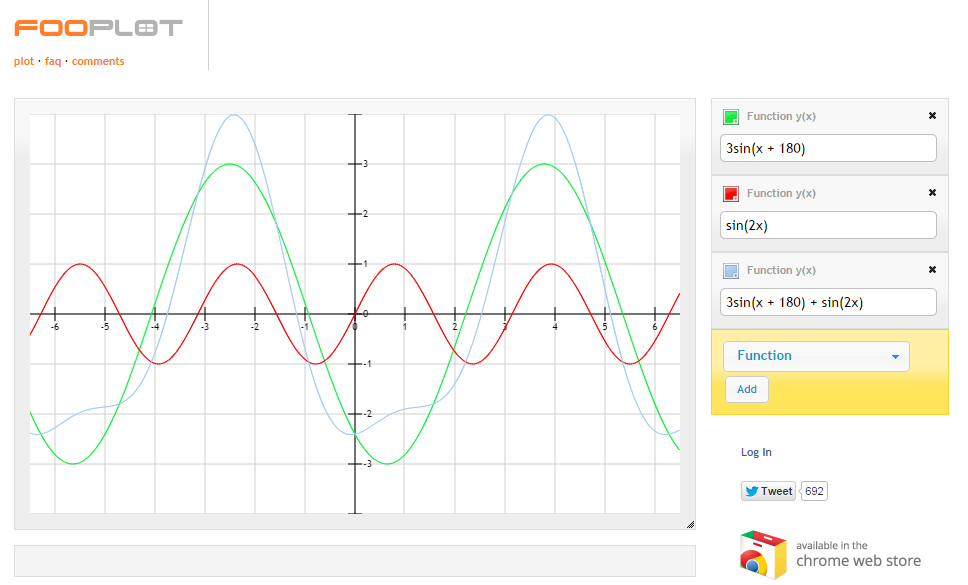 To add a little more maths for those of us (including me) who haven't studied trigonometry in a while. When messing with waves there are three values you can adjust Frequency, Amplitude and Phase. These represent

T in this case is the time from the start of the cycle, as you increase it you get the change in TidalForce. Phase manipulates T=0 and the Full Moon (using FooPlot at least is degrees so 180 is half a lunar cycle).

It would mean a more complicated modulation of the tides. On earth, we have a superposition of two cycles: An exactly 12 hour cycle of the sun, and a cycle deviating from that by the moon. The moon tides are dominant because the sun, although much more massive, is much farther away. Yet the effects are already within the same order of magnitude.

Now with several moons, you'd add further oscillations in the mix, which — assuming the moons are all far enough away to have many-day cycles — would add to the pattern of spring tides and neap tides, which would make that pattern more complex (in the simplest case, you'd get a modulation if the spring/neap tide height created by the other moons).

While the most likely orbit for a moon would be a equatorial (or close to equatorial) one, also other orbits are possible (although less likely). The other extreme would be a polar orbit; the tidal effect of that would be to have an exact half siderial day period (the siderial day is the time of one rotation; the solar day is slightly different because the movement of the planet over the sun). Such a polar moon would create maximal daily tides while above equator, but no daily change while above the pole; the cycle of that would be the orbit time of that moon. Note that the tides in the polar region, which are zero for an equatorial-orbit moon, would have an orbiting-time cycle with that moon (of course several such moons would again give a superposition of such cycles, resulting in polar spring and neap tides).

Assuming that the equatorial plane of the planet isn't too much tilted to the ecliptic (that is, you've got days and nights), you'd got a yearly pattern of whether the daily ("equatorial") tides by that polar-orbit moon have spring- or neap tides due to the solar tidal contribution. Of course similar considerations would hold for the tidal superposition with equatorial moons.

Note however that the earth's moon is extraordinarily large compared to the earth's size; most moons are much smaller and thus have a much lower effect on the tides. Also note that the moons cannot have arbitrary orbits, because if they come too close to each other, they'll disturb each other's orbit too much so that it won't remain stable.

Also note that I've assumed approximately circular orbits; elliptic orbits would cause extra effects, because the tides would be larger when the moon is closer.

I love the idea of competing moon gods!

The people might not grasp the relationship between the moons and tides but might if the cycle was apparent.

On an island in a global ocean with no girdling contenents to block the tide and keep the water in separate sloshing bowls, it would work as seen on the plots above and except for the part about also working on the backside it would be seen that the moon raises tides and they all pull individually.

Now in a large comma-shaped landmass in the southern hemisphere, the native peoples see a chaotic tide with no obvious relation. The water moves around local areas in gyres, and they are pumped by the tide like a kid's swing is pumped by his legs. It will not work so well if the pumping is not in a clean rythem. The gyre can do crazy things and even reverse direction.

The north sea-people come to the south and have an understanding of tides and with skills like our Polynesians they figure out the existence of gyres. What will the difference in phenomena do to their beleif system and what might they try and teach the southerners?

Add to that different stars and astrology interpretations can have a lot of creative input.

Would they tend to cancel each other out, amplify the effects, cause less-predictable tides, or what?

All of the above! Depending on their relative position and distance (e.g., apogee or perigee) and mass they could either cancel each other out or amplify the effects. Calculations may be regular and predictable, but also more complex, leading to an illusion of being less predictable.

Something worth keeping in mind is that earth's moon is quite large compared to others in the solar system, relative to the size of the planet that it orbits.

Eclipses? Get used to them, there will be plenty. Calculating the month? Ummm.. Which moon was that again? Night sky? Each moon adds brightness. etc.

Also check out Skyrealms of Jorune :)